Prior to joining 2M, Ruff had worked in sales for a large distributor specializing in turf irrigation, pump supplies and water well equipment. That’s where he met his then supervisor, Bill Mills. When Mills decided to branch out and start his own business he asked Ruff to join him.

“I asked him to join us because I liked him and I trusted him,” Mills said. “He knew the customers, he knew the product lines, and he knew the area. Dan was very outgoing, pleasant, funny and always joking about something. He was exactly what we needed.”

“I left a high-paying job and a new company car for a third of the wages and a four-year-old beat-up van,” Ruff said, laughing. But he knew it was the right move. “I trusted Bill. He had the right vision.”

When 2M opened for business, they set out to provide the best service in the industry. They installed the first 800-number in the pump industry, so that customers could call in toll-free any time of day. One of the three-person team stayed in the office to answer the phone while the other two were out selling. Ruff would drive as many as 1,400 miles over the course of a week. Mills laughs when he recalls the 5,000-square-foot warehouse and $80,000 worth of inventory.

“We were a grassroots organization,” he said. “But our goal from the beginning was to give better service to our customers than anyone else, and Dan understood that.”

“I had the gift of sales gab,” Ruff said. “I could find humor in just about any situation. That breaks the ice with people. At 2M we were honest, we gave our customers all the correct information, and we were available 24/7. And through it all, what a luxury it was having Bill as my boss and mentor, along with him being a close friend.”

Ruff became a resource of information and service. Early in his career at 2M, Ruff learned turf irrigation, sprinkler design, residential, commercial, industrial, and golf course irrigation, water treatment, stock water pipelines, canal and reservoir lining systems, and more. New turf irrigation technology was developing rapidly back then, and Ruff learned it all — then went out and sold it. Ruff even started getting calls from civil engineers asking for his advice.

Ruff played a critical role in a memorable project involving an extensive radio control irrigation system at Malmstrom Air Force Base in Cascade County, Mont. After Ruff completed thorough site surveys and detailed proposals, the civil and air force engineers hired 2M over their much larger competitor. This was just one of many major projects that included canal and reservoir lining, oil field frac water depots and pump stations, stock water and irrigation pipelines, residential, commercial, and golf course irrigation design and sales.

During his career, Ruff also served as VP, secretary and four-time president of the Montana Water Well Drillers Association (MWWDA), totaling 12 years of service. In 1994, he earned the Trailblazer Award from Hunter Industries, one of the largest turf equipment manufacturers in the world. In 1998, he earned it again — a rare honor.

Additionally, Ruff served on the boards of the Montana Association of Montana Turf, Ornamental, and Pest Professionals (AMTOP); the Montana Nursery & Landscape Association (MNLA); and the Peaks and Prairies Golf Course Superintendents Association.

“He was helping to grow the company from the get go,” Mills said. “Basically, Dan was a super salesman. He was an employee, but he was like a partner. 40 years later, we have gone from one location to 15 branches plus a corporate office. Dan spent a lot of personal time developing relationships. We’ve been working with some customers’ families for generations.”

Dan has also worked with generations of 2M Company leadership. When he started, Bill Mills ran the company. Today, Bill’s son Buzz Mills leads 2M. “I worked for Dan in the warehouse way back in the summer of 1978, at the age of 11,” Buzz Mills said. “I watched him paint the first 2M sign.”

“Bill created a culture at 2M that was more like a family than a business. The 1990s brought tremendous growth of sales, new products and locations. Driven by Bill and Buzz, our company footprint expanded dramatically, but the 2M culture and mentality never waivered. That’s what made my career of 43 years at 2M so enjoyable,” Ruff said.

Ruff plans to continue consulting in the industry after he retires. He hopes to spend more time golfing, fishing and traveling to visit friends and family around the country.

“The biggest blessing of my career is that I have very close friendships with employees, customers and vendors throughout most of our locations,” Ruff said, “which I feel very fortunate to have, and will continue to have, after I retire. What a ride it has been.”

“We are pleased to add Gicon to the Headwater family. The team at Gicon has served the pump industry and related water resource markets for over 40 years and has an outstanding reputation within the industry for quality service and technical depth. The acquisition of Gicon adds to Headwater’s commitment to the critical groundwater markets, provides geographic expansion in the Texas market and further fulfills our objective of being the leading source for water systems solutions distribution in the U.S.”

Headwater Companies, LLC is a collection of leading groundwater distributors. Headwater is a focused groundwater distribution organization that delivers quality products and leading brands to the industry, providing contractors with the availability and service they demand to meet their application challenges. Franklin Electric is a global leader in the production and marketing of systems and components for the movement of water and fuel. Recognized as a technical leader in its products and services, Franklin Electric serves customers around the world in residential, commercial, agricultural, industrial, municipal, and fueling applications.

BILLINGS, Mont., June 06, 2018 (GLOBE NEWSWIRE) -- 2M Company, Inc., wholesale distributor to the water systems, irrigation, treatment, retention, and waste water industries, is celebrating its 40th year in business. It was 1978 when founders Bill Mills and Chester Majors (the two “M”s behind the name), along with 40-year-veteran Dan Ruff, launched the company in Billings, Mont. with a primary focus on delivering exemplary customer service. 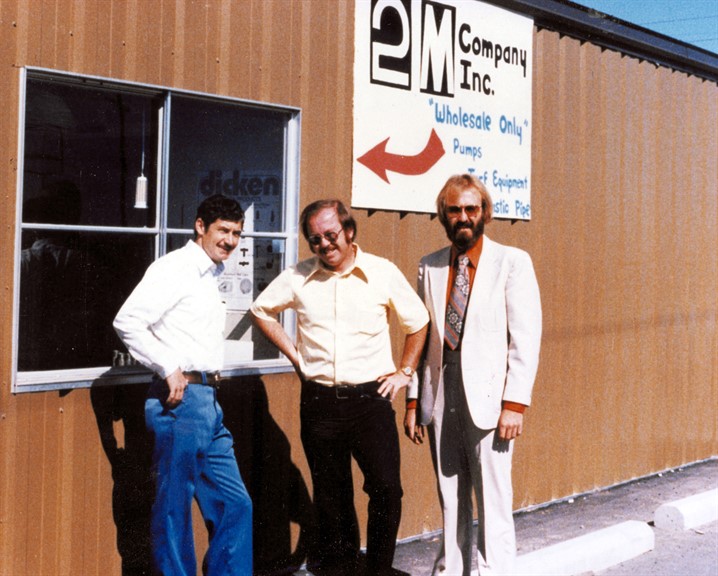 The first to open its doors on Saturdays, extend summer hours, offer customer trip promotions, and provide emergency service “24/7” – even on holidays – 2M steadily grew from a small, local operation to a company with 15 locations across eight states in the Rocky Mountains, Southwest, and Pacific Northwest.

“It was the company’s commitment to providing the best inventory, the most knowledgeable staff, and the most attentive customer service that propelled 2M from the reputable local guys to leading industry players,” said H.A. “Buzz” Mills, President of 2M and son of founder Bill Mills.

2M’s leading Inventory Container Program, its multiple turbine build facilities, and its mission to provide what they coined “legendary service” at every customer touchpoint, not only gained the company a loyal following, but also caught the attention of Headwater Companies, a collective group of leading groundwater distributors owned by Franklin Electric. 2M joined the publicly traded company in 2017.

“As part of the Headwater Companies family, we’ve been able to extend our reach, increase our buying power, and take even better care of our customers,” said Mills. “Our partnership with Headwater Companies will only lead to greater success for 2M and our customers as we continue to expand into new markets throughout the West in the upcoming years.”

Fort Wayne, IN – April 10, 2017 - Franklin Electric Co., Inc. (NASDAQ: FELE) announced today that it has reached agreement to acquire controlling interests in three distributors in the U.S. professional groundwater market. Franklin Electric will acquire 2M Company Inc. of Billings, Montana; Western Hydro Holding Corporation of Hayward, California and Drillers Service, Inc. (DSI) of Hickory, North Carolina for approximately $89 million in the aggregate, which includes assumed debt. The 2M and Western Hydro transactions have closed and the Company expects the DSI acquisition to close before the end of the second quarter 2017.

“The specialized groundwater distribution channel in the U.S. through which we sell our products is an important element in the ultimate sale, support and specification to the installing contractors. Working in partnership with our distributors, Franklin Electric has developed a broad array of products and systems solutions that will only grow as regulatory and efficiency demands increase in North America.

Over the last several years, Franklin Electric has worked closely with the management of these three companies and the leadership of other strategic distribution partners. These relationships have provided us with insight into and appreciation for the value proposition offered by water systems distribution. By acquiring Western Hydro, 2M and DSI, including the stand-alone 2M/DSI joint venture, Franklin Electric is forward integrating into this channel with four strong, customer focused organizations competing in the market, increasing our commitment to the entire channel and the installing contractor base. Our new distribution entity, with a national footprint of sixty locations and nearly 500 employees, will be the largest in the industry.”

Franklin Electric will operate the acquired distributors in an entity named Headwater Companies, LLC. The Company has named DeLancey W. Davis, a twenty-five-year industry veteran including the last eleven as an executive officer of Franklin Electric, as President of Headwater Companies, LLC. Mr. Davis will have overall leadership responsibility for the new Headwater Distribution segment and will begin to immediately integrate the three acquisitions into a single operating unit.

For financial reporting purposes, as of the second quarter, all the acquired entities will be wholly owned subsidiaries and included in the Company’s consolidated results. The Headwater Distribution segment will be reported separately from the existing Water Systems segment, which will continue to report the results of the global water manufacturing business. The new segment is expected to have operating income margins of approximately 4 to 6 percent and pre-tax return on capital measures consistent with historical Franklin Electric returns after certain integration actions are complete.

The new segment will have approximately $275 million of consolidated annual sales and is expected to be neutral to the 2017 adjusted earnings per share guidance of $1.77 to $1.87 the Company has provided.

The earnings from the acquired companies are expected to add twelve to fourteen cents to Franklin Electric’s 2018 adjusted earnings per share.

“By forward integrating into distribution in the U.S., Franklin Electric is taking a logical next step in our evolution as a groundwater pumping systems company. This action places Franklin Electric shoulder to shoulder with the key decision makers in this end market—distributors and the installing contractors. The Headwater companies will continue to operate as full line wholesale distributors with a focus on total water systems support, including products from all industry manufacturers. Headwater will maintain a laser focus on supporting the professional installing contractor.”

A conference call to review this announcement will commence at 9:00 am EDT on Tuesday, April 11, 2017.  The webcast will be available in a listen only mode by going to:

Franklin Electric is a global leader in the production and marketing of systems and components for the movement of water and fuel. Recognized as a technical leader in its products and services, Franklin Electric serves customers around the world in residential, commercial, agricultural, industrial, municipal, and fueling applications.